Partey signed a long-term deal at the Emirates after he completed his medical and paperwork just before Monday’s 11pm deadline.

He will wear the No 18 shirt and will join up with his new team-mates next week after he returns from international duty with Ghana.

Partey has been a key player in Diego Simeone’s midfield since breaking into the first team from Atletico’s academy in 2015.

Mikel Arteta said: “We have been watching Thomas for a while, so we’re now delighted to add such a high quality player to our squad.

“He is a dynamic midfielder with great energy. He brings a lot of experience from a top club that has competed at the highest level in La Liga and the Champions League for several years.

Sky Sports’ Paul Merson says he almost fell off his chair after hearing Arsenal are expected to pay Atletico Madrid’s £45m release clause for Thomas Partey, adding he would be a great signing for his former club

“We’re very impressed with his attitude and his approach to the game. He’s an intelligent footballer and we’re looking forward to him integrating into our system and contributing to the progress we’re building at the moment at the club.”

Partey becomes Arsenal’s seventh signing of the summer, with the club having already signed Willian on a free transfer from Chelsea and defender Gabriel from Lille for £27m.

The Gunners also agreed permanent deals for defenders Cedric Soares and Pablo Mari, who had been on loan at the club, and extended the loan deal for Dani Ceballos from Real Madrid for a second year. 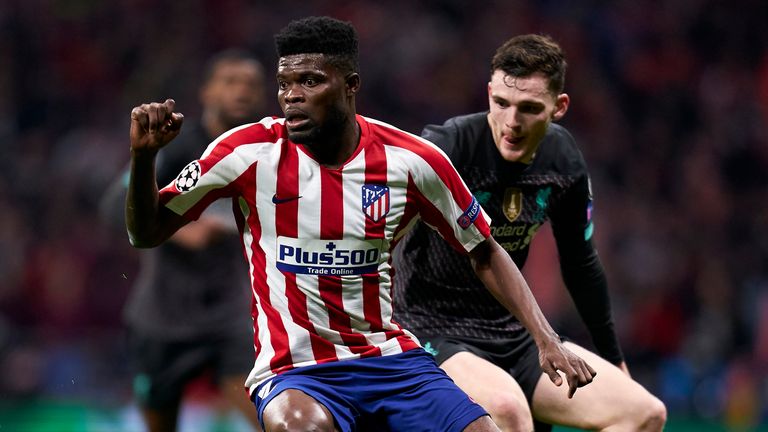 In recent weeks, Arsenal also moved for Lyon midfielder Houssem Aouar but after their offer was rejected they turned their attention back to the Atletico midfielder.

Lucas Torreira has moved in the opposite direction to Atletico Madrid in a loan deal until the end of the season and Matteo Guendouzi has signed for a German club Hertha Berlin on a season-long loan.

“I think Thomas Partey a top drawer player. I nearly fell off my chair with £45m, I don’t think that’s a lot of money at all for the quality of player.

“One thing he brings as well is discipline. Atletico Madrid are probably one of the most disciplined teams in Europe and he will do that. He’s not a midfielder that goes running all over the place, he’s very disciplined and plays in a disciplined team and I think he will be a great signing.

“I think what Mikel Arteta is doing, he’s trying to get rid of the players who aren’t involved, he doesn’t want them hanging around and he wants them out. Fair play, I like what Arsenal are doing.

The French midfielder has been surplus to requirements at Arsenal since their 2-1 defeat to Brighton on June 20, where he was involved in a post-match altercation with Neal Maupay.

Guendouzi, who joined the Gunners from Lorient in 2018, is under contract at the Emirates Stadium until 2022.

The 21-year-old has played 82 times for the club in all competitions, scoring once and making five assists since his debut in August 2018.