Everton moved up to second in the Premier League while adding more misery to Mikel Arteta's Arsenal with a 2-1 win at Goodison Park.

Everton took the lead when Dominic Calvert-Lewin's header was deflected into his own net by Alex Iwobi's cross from Gunner's captain Rob Holding (22), but Arsenal scored the penalty after Tom Davies fouled Ainsley Maitland-Niles (35) Nicolas Pepe. .

Everton went into halftime thanks to Yerry Mina's header from a corner from Gylfi Sigurdsson (44) and Arsenal came closest in a quieter second half when David Luiz hit the wood with a deflected shot after Jordan Pickford fumbled a cross.

A year after both Carlo Ancelotti and Arteta took on their respective jobs, their seasons continue to go in opposite directions as Everton's third straight win leaves them in second place behind Merseyside rivals Liverpool for at least 24 hours.

Arsenal's rut ​​continues; They remain in 15th place with just 14 points from 14 games after losing five of their last seven in the Premier League.

How Arsenal fell flat again when Everton looked up

The opening phases in Goodison Park were uneasy. Both sides had only one touch in the opposing penalty area before Everton kicked off in the middle of the first half. Former Arsenal winger Iwobi's low, early cross was triggered by Calvert-Lewin but hit Holding and found the lower left corner of his own net.

After Pierre-Emerick Aubameyang sustained a calf injury, Arsenal missed a bite in the first half, but this was offset with the first shot on goal when Davies & # 39; hit Maitland-Niles in the area for clearance. Pepe rose and scored, becoming Arsenal's top scorer in all competitions with six goals. 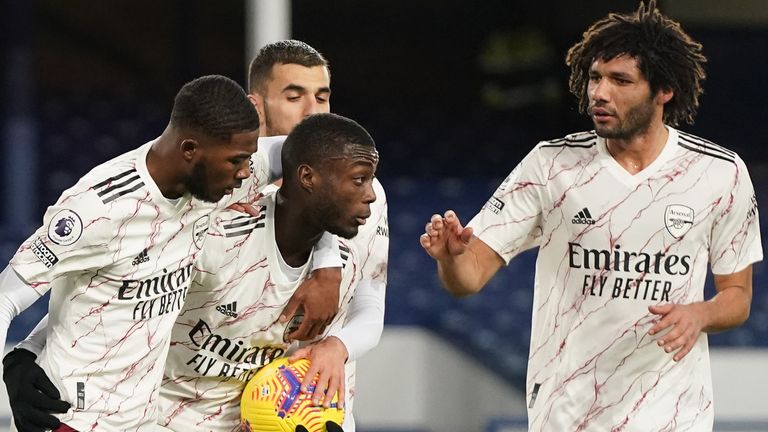 After Calvert-Lewin had brilliantly won a corner at half-time, Sigurdsson's resulting set piece found Mina at the near post when he peeled off Pepe and Bukayo Saka and looked into the corner despite Bernd Leno's touch.

Incredibly, Mina's last four PL goals were all scored in the 45th minute, when Everton picked the perfect time to score.

Arsenal had a chance to level up early in the second half when Pickford failed to collect Willian's cross, but Luiz's deflected half volley from 15 yards hit the post and accidentally fell onto a blue jersey in the penalty area. 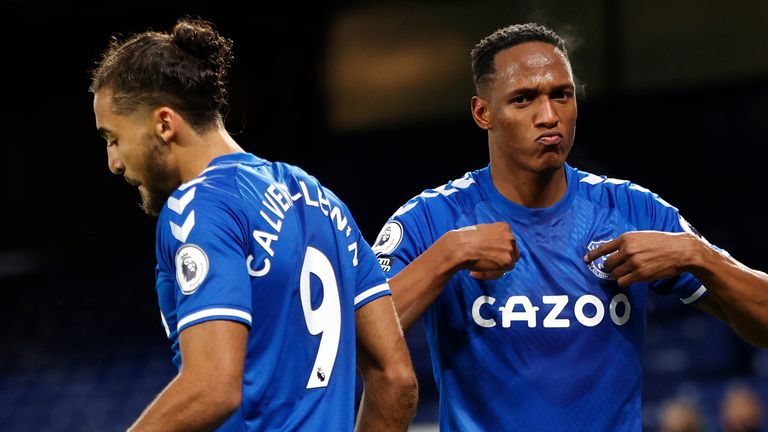 Pierre-Emerick Aubameyang had a calf injury for Arsenal but Mikel Arteta said he should only sit out for a few days. Willian came for him while David Luiz replaced the suspended Gabriel and Gabriel Martinelli returned to the bench for the first time since his knee injury in June.

For Everton, Jordan Pickford returned to replace Robert Olsen, while the injured Allan was replaced by Tom Davies. Seamus Coleman was back on the bench for the first time in two months following a hamstring injury.

The Gunners puffed and puffed – Arteta's team kept getting younger when Joe Willock was introduced and Gabriel Martinelli came on for the first time since March – but quality was lacking in the final third as Everton managed the game largely in the second half to Richarlison and Calvert-Lewins hold-up game.

Arsenal, not having scored an open-play goal in any of their last five Premier League away games, were limited to long-range fighting when Pepe and the uninspired Willian lashed wide, and despite late pressure, Everton survived when Pickford later slipped Kieran Tierneys Cross-shot to secure the points.

Everton received a huge ovation from the 2,000 fans at Goodison Park after the final whistle, but concern for Arsenal continues. The Gunners' 14 points from 14 games this season are their worst record in this phase of a season since the 1974/75 season.

Everton will now host Manchester United in the final round of 16 of the Carabao Cup on Wednesday, live on Sky Sports Football at 8 p.m., before taking on Sheffield United on Boxing Day at 8 p.m.

Arsenal host Manchester City in the Carabao Cup of the last eight on Tuesday, live on Sky Sports Football at 8 p.m., before Chelsea host the Sky Sports Premier League live in the Premier League on Boxing Day at 5:30 p.m.