In a quiet corner of a cemetery in south-west London lies an unremarkable grave. The 99-year-old headstone is barely legible. Grass and weeds grow all around.

There is nothing to mark it out from those around it. Yet here lies a figure who is anything but unremarkable. Here is the tale of Andrew Watson – the Scottish ‘Pele’, how he was discovered and why he is so important.

“In the world of football he is by far and away the most influential black footballer of all time.”

Those are the words of Ged O’Brien, the historian who rediscovered Watson’s story 30 years ago while carrying out a feasibility study for the Scottish Football Museum.

O’Brien said: “I was looking at a picture of the 1882 Scotland squad and in the middle of the back row was a black footballer. Knowing football, I knew that Arthur Wharton of Preston North End was the first black footballer. I refused to believe the evidence of my own eyes.

Image:
Watson is a Scottish hero after steering his team to two incredible victories over England

O’Brien’s extensive investigation into the life and times of Watson found that he was the son of a wealthy Scottish merchant and a Guyanese mother. His father died when Andrew was just 13, leaving him a fortune, the equivalent of around £3m today. It appears his mixed-race heritage proved no barrier to his progress.

“He is an outlier. He was a very middle-class, mixed-race young man,” added O’Brien. “He went to Glasgow University, he went to public schools and basically knew his own place in the world.”

It was the move to Glasgow in the 1870s that set him on the path to making football history. A keen all-round sportsman, Watson played at full-back for Maxwell FC and then Parkgrove where he was also elected club vice-president.

He moved to Queens Park, at the time the strongest team in Scotland. Again he took on an administrative role, this time as match secretary.

According to Richard McBrearty from the Scottish Football Museum, this was at a time when Scotland was transforming the game from one based on individual prowess and dribbling to short passing and team work.

“Scotland started to shape the way football would be played moving forward as the game developed not just in the UK but across the world. Andrew Watson was a key player for Scotland, the best team at that time,” said McBrearty. 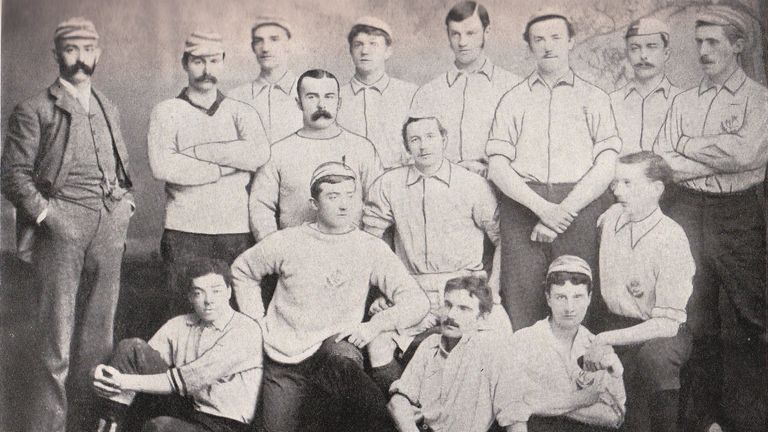 Image:
Watson moved to London in 1882 and played for several clubs including Corinthians

Not just key, but captain too in a match that confirmed Scotland’s superiority. The 6-1 win over England at The Oval in 1881 remains England’s heaviest defeat on home soil. And just to confirm it was no fluke, Scotland, with Watson again in the team, inflicted a 5-1 defeat in Glasgow the following year.

There is a mural commemorating the result at the Hampden Bowling Club, the site where the match was played.

After moving to London in 1882 Watson played for a number of clubs, including Swifts, Pilgrims and Corinthians, one of the elite teams of the era.

He also officiated matches before finishing his playing career with Bootle. He trained as an engineer after moving back down to London, where he passed away in 1921. And his story appeared to have died with him until O’Brien’s discovery in 1990.

He now sits in Scottish Football’s Hall of Fame alongside other greats such as Sir Kenny Dalglish and Sir Alex Ferguson. 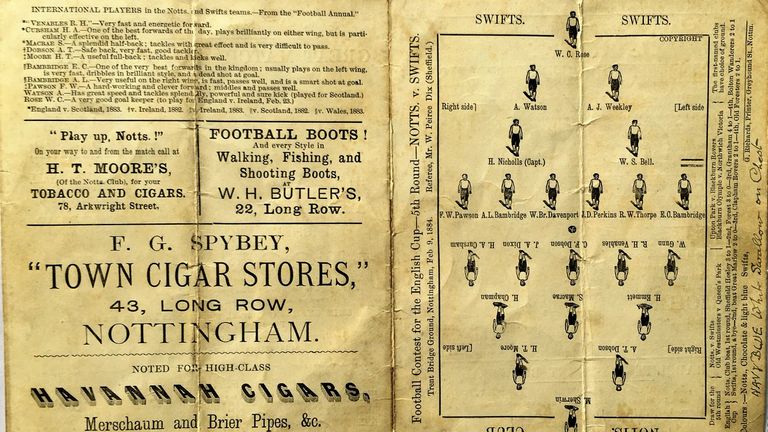 Image:
Watson makes the teamsheet for Swifts against Notts in 1884

But McBrearty believes he deserves international acknowledgement, saying: “He has to be looked at with the likes of Pele and Garrincha in Brazil within the history of black football. He has to be given that recognition.”

“The good news is that people are working to refurbish the gravestone in Richmond in London which is currently looking sad and decrepit,” said historian Andy Mitchell.

“It would be great if Andrew Watson could be celebrated in other ways. There are a couple of murals in Glasgow now and wouldn’t it be wonderful if we could have a statue to celebrate his greatness.”

A fundraiser for the gravestone reached its target in just a couple of days. The plan is to have it restored for March 2021 to mark the 100th anniversary of the passing of a true footballing icon.

Keep across all our features, news stories and video content on Sky Sports News and our Sky Sports platforms. Check out the latest Black History Month content here