Lampard: Rudiger in competition to begin

Antonio Rudiger is back in contention to play for Chelsea following discussions with head coach Frank Lampard.

Germany defender Rudiger was named in Lampard’s matchday squad for the first time this season for Saturday’s 0-0 draw against Manchester United.

With Thiago Silva rested for the trip to Krasnodar, Lampard says Rudiger could get his first minutes in the Champions League after holding positive talks with the defender.

“I’ve had discussions. I saw the story. I’ve always had a positive relationship with him,” Lampard said.

FREE TO WATCH: Highlights from the 0-0 draw between Manchester United and Chelsea in the Premier League.

“Sometimes players are out of the squad but he is very much in contention to play.”

Lampard goes into Wednesday’s game in Krasnodar as only the second Englishman, alongside Sir Bobby Robson, to manage a team in more than one Champions League campaign.

“I don’t feel there is a responsibility of the ‘English managers union’ but I was surprised by the stat myself,” Lampard added.

“At end of my career I heard a lot about a merry-go-round but I think it’s different now. Hopefully more opportunities for English coaches. Sometimes we can have managers at home who can do the job as well.

“I’m not thinking of myself as a standard-bearer but will do the job as well as I can.

Zouma: Chelsea defence getting to know each other

Chelsea have kept clean sheets for the first time this season in the last two games against Sevilla and Manchester United. 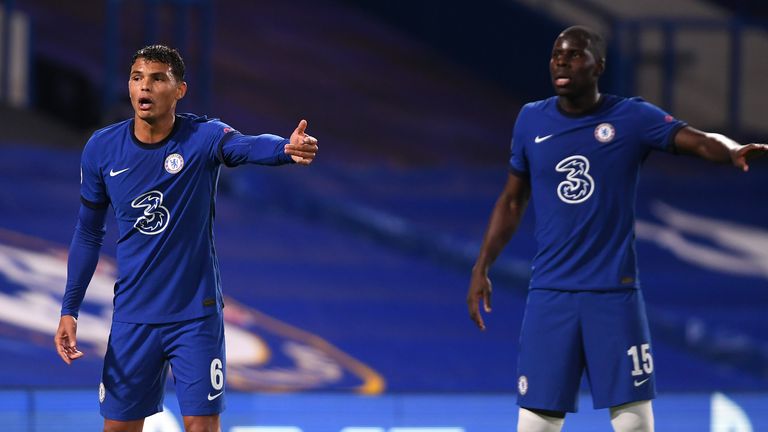 Kurt Zouma believes the clean sheets have come from an improvement in communication and growing familiarity with new arrivals such as Thiago Silva and Ben Chilwell.

“Everyone’s been training hard. Defensively we’ve done a great job. Communication has been better too.

“The lads made an unbelievable effort, working the same way. We know each better now as well. We’ve not had a lot of time to prepare with many games but we’ll get there soon hopefully.

“(Thiago Silva) brings experience. He’s trying to talk to players, help people – which is great for us. He brings calm.

“(Me, Thiago and Edouard Mendy communicate) at the minute in French. Edu has very good English but with Thiago we naturally speak French.”