Liverpool lose their momentum once more

It was not until the 77th minute of Wednesday’s meeting with Brighton that Liverpool mustered their first and only shot on target of the night, a tame effort by Alex Oxlade-Chamberlain which looped harmlessly into the arms of Robert Sanchez.

It summed up the bluntness of their performance. Liverpool, 68 home games unbeaten in the Premier League before their defeat to Burnley two weeks ago, have now lost two in two. The fortress has been breached and Manchester City are next.

Pep Guardiola’s side sit seven points clear of the defending champions now and it is perfectly possible that the gap could be widened on Sunday. While Liverpool have failed to score in three consecutive home league games for the first time since 1984, City are on a record-equalling 13-game winning run.

Liverpool appeared on the cusp of a resurgence after their back-to-back away wins over Tottenham and West Ham last week but it’s meetings with the Premier League’s lower-ranked sides that have exposed their flaws this season.


FREE TO WATCH: Highlights from Brighton’s win against Liverpool

In the last month alone, Jurgen Klopp’s men have dropped points to Newcastle, West Brom and Fulham as well as Brighton and Burnley. They are 24 points worse off than at the same stage of last season.

It is perhaps no great surprise that Liverpool lacked freshness. This season could hardly have been crueller in terms of injuries, with goalkeeper Alisson Becker the latest player to join a long list of absentees which already features all three of their senior centre-backs, plus Fabinho, Sadio Mane, Diogo Jota and Naby Keita.

It is to their credit that Klopp’s patched-up side were able to haul themselves to victory over Spurs and West Ham but their exertions in those games clearly came at a cost.

“It’s a long time since we looked like this, but we looked fatigued, mentally, and that leads to not the best legs as well,” added Klopp. Image:
James Milner shows his dejection as he leaves the pitch

Squad depth is an issue.

It is already clear that Liverpool left themselves short defensively – a problem they hope to have remedied with the signings of Ben Davies and Ozan Kabak – but the same issues are increasingly apparent at the other end of the pitch too.

Liverpool have not scored at Anfield for 348 minutes.

Without Mane and Jota, Liverpool’s only senior options beyond Salah and Roberto Firmino are Divock Origi, Oxlade-Chamberlain and Xherdan Shaqiri. All three have had their moments at Liverpool but it is difficult to think of any recent examples of them tilting games in their side’s favour.

They were not the only ones to struggle at Anfield on Wednesday night, of course.

Salah set the tone for his evening by blasting over when put through on goal in the opening few minutes. Thiago Alcantara made more fouls than he created chances. Trent Alexander-Arnold lost possession more times than anyone else on the pitch. 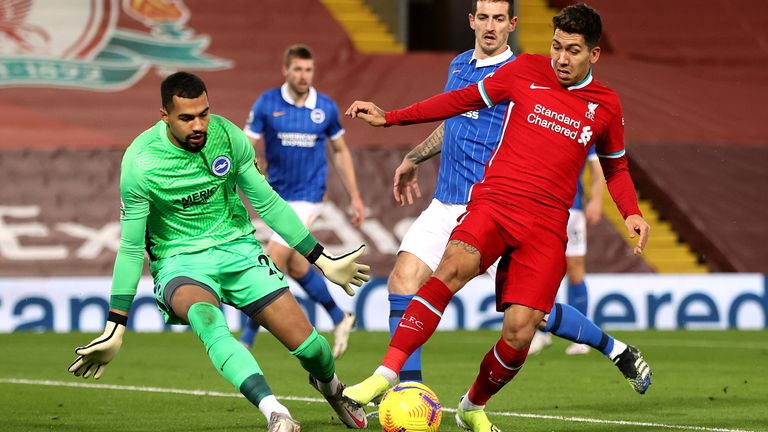 The whole side lacked cohesion, both in terms of its defensive organisation and its attacking approach play. Liverpool attempted 27 crosses over the course of the 90 minutes but only three of them found a red-shirted player. On other occasions, their passing moves broke down before they even got that far.

“We lost too many balls in promising situations,” added Klopp. “I know the boys can play a pass from A to B but tonight B was not reachable at a lot of moments.”

The worry, though, is that these issues have been there throughout the season.

Liverpool, so relentless on the way to the title last year, have not won more than two consecutive Premier League games since September. Every time they seem to hit form, their momentum stalls.

It was the same story after the 3-1 win over Arsenal in the early weeks of the campaign and it happened again after the 7-0 thrashing of Crystal Palace in December.

The belief that drove them to the crown last year appears to have wavered and events at Anfield on Wednesday night only heighten the importance of what happens when they return on Sunday.

A winning response against Manchester City is imperative. Even if they manage that, however, they will need to create lasting momentum if they are to successfully defend their crown. Right now, that’s something which looks beyond them.