Tottenham goalkeeping coach Nuno Santos has been hit with a one-match ban and an £8,000 fine for confronting referee Peter Bankes after Sunday’s 1-1 Premier League draw with Newcastle.

Santos was sent off for his protests following Newcastle’s controversial equaliser at the Tottenham Hotspur Stadium.

The Portuguese accepted the charge of using abusive or insulting language towards a match official, the Football Association has announced.

FREE TO WATCH: Highlights from Tottenham’s draw with Newcastle in the Premier League

“Tottenham Hotspur FC’s goalkeeper coach, Nuno Santos, has been suspended from the touchline for one match and fined £8,000 after admitting a charge for a breach of FA Rule E3 and accepting a standard penalty,” read an FA statement.

“At full-time of the Premier League fixture against Newcastle United FC on Sunday he used abusive and/or insulting language towards a match official on the field of play and/or his behaviour amounted to improper conduct.”

Spurs had been heading for victory thanks to Lucas Moura’s first Premier League goal since December, but Callum Wilson buried the spot-kick to level the match. 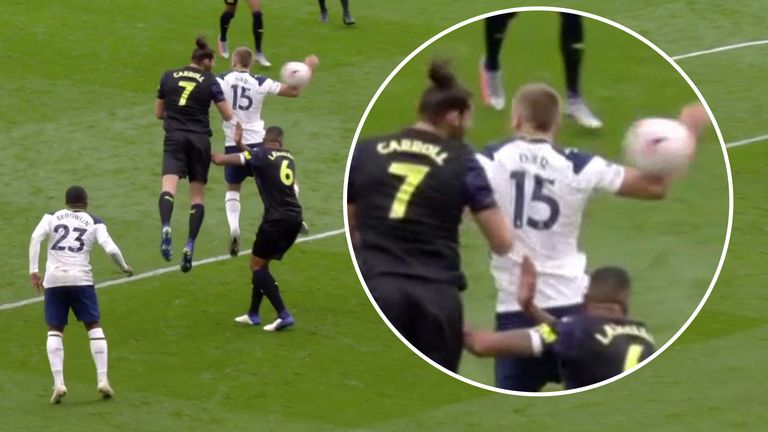 Dermot Gallagher, Sue Smith and Stephen Warnock discuss whether Newcastle should have been awarded their controversial late penalty for handball against Tottenham

Santos was among a clutch of players to vociferously protest the decision, that proved just the latest in a spate of controversial handball calls following the recent rule changes.

Spurs boss Jose Mourinho refused to criticise the officials or the new handball interpretations in light of the draw, determined not to receive any personal fine. International Football Association Board (IFAB) rule amendments mean that if the ball hits the hand of a player who has made their body “unnaturally bigger” then a foul will be awarded.

The switch has led to a swathe of disputed penalties at the start of the new Premier League campaign, with Manchester United claiming a similar spot-kick at Brighton and Crystal Palace boss Roy Hodgson left infuriated too after a similar decision went against his side against Everton.

Speaking after Sunday’s match, Mourinho said: “I don’t want to comment, I just don’t want to. My team played a fantastic match, I cannot ask more from the players.”

Watch Tottenham’s next match against Chelsea in the Carabao Cup from 7.30pm on Tuesday, live on Sky Sports Football; kick-off 7.45pm.