In the early 1970s, Steve Gorad '63 had a successful career as a clinical psychologist. He was in charge of the alcohol department at Boston State Hospital and had a private practice, but he was restless. "It wasn't enough," he says. "I was a long-haired hippie who wrote letters to people who didn't want to go to Vietnam. I had doubts about what we really knew about psychology. I was a seeker." When Gorad's boss at the hospital refused to give him time, he gave up to attend a 40-day spiritual workshop organized by a group called Arica. He immersed himself in Arica, turned his home in the South End of Boston into a church, and toured Latin America. "My answer to almost everything in those years has been to say yes," he recalls.

During his stay in Chile, Gorad visited Bolivia. There he encountered quinoa, a grain that is considered rural food in Latin America and was relatively unknown elsewhere at the time. He was impressed with its taste and intrigued when he learned of its nutritional value. He began studying quinoa while traveling frequently to the high altitude region of Bolivia, the Altiplano, where it is widely distributed, and read scientific articles. He learned that quinoa plants are often resistant to drought, floods and frost. He also learned that the protein content of quinoa is unusually high, between 16 and 21% (compared to less than 14% for wheat and around 7.5% for rice). He also found that it contains all of the "essential" amino acids – those that must come from food because the body cannot make them itself – in proportions close to the ideal nutritional ratio. "This means that the quality of quinoa protein is roughly the same as that of milk (casein) or egg (albumin) without the disadvantages of an animal source," he wrote. (Gorad credits MIT for giving him the tools to evaluate the science behind these nutritional claims. "MIT taught me the scientific method," he says. "I can't accept claims simply because I'm told about them. I need to see proof, and that served me a lifetime – and certainly when it came to quinoa. ")

"I just had the feeling that if I left the orderly path my life would not collapse. It would open up to something else more exciting. And that's exactly what happened."

In the late 1970s, Gorad and two partners investigated the possibility of importing quinoa to the United States. James Silver, who served as the purchasing manager at Erewhon West, a Los Angeles health food company, recalls hearing that quinoa's nutritional properties were a tempting product. "Quinoa wasn't available in the US when they started, at least not in a commercial sense. It certainly didn't exist in the health food industry," says Silver. When Gorad and his partners founded the Quinoa Corporation in 1983, "they were the first to do so For a long time the only importers of quinoa in the USA. "

Gorad and his partners brought passion to their company. “We were on a mission for quinoa,” he says, adding that in the early days they met with shoppers at health food markets, distributed flyers, and “served small paper cups of cooked quinoa”. Using this approach, they sold small quantities of grain, but faced the challenge of increasing and securing supplies for import. Much of the available grain had to be cleaned thoroughly because it was "full of stones, dirt, dust, plant particles, bits of metal, glass, unidentifiable objects and even rodent droppings," recalls Gorad. (Eventually the Quinoa Corporation developed a relationship with the tea company Celestial Seasonings and used their machines on an industrial scale, including gravity tables, to clean the product.)

A year after the business started, tragedy struck. One of Gorad's partners, David Kusack, took an afternoon off to meet with potential suppliers and visit an archaeological site in Bolivia. He was shot in the back while sitting on a hill. His death was classified as a likely botched robbery, but theories abounded: it was a fake identity, business interests were threatened by quinoa farmers who banded together, the CIA was behind it, quinoa was cursed. Whatever the reason, Gorad was devastated. "That almost stopped the project," he says.

The Quinoa Corporation persisted but continued to experience turbulence. For a while, the company worked with major health food retailers Eden Foods and Arrowhead Mills. But then these companies began repackaging the grain under their own names, eventually finding their own Latin American suppliers, and severing ties with Gorad and its partners. Their business was struggling financially, although the grain became more and more popular. "The Quinoa Corporation never had the money to do everything we had to do," Gorad recalls. “Not once did we advertise or advertise quinoa. We made banners and little red buttons that just said, "Quinoa is here."

In 1986, Great Eastern International of Australia bought Quinoa Corporation and offered a capital injection that enabled the company to expand and market the grain in the United States. Gorad and his partners bought quinoa processing equipment, hired more workers, and spent their reserves on a large shipment of the grain. However, they had overestimated demand, and the company had once again had tough times. In early 1988 Gorad resigned "to ease the company's financial burden," he says. Even so, he continued to evangelize for quinoa. "I never felt like I was getting out of the mission, out of the flow of things that had to happen," he says.

Over time, he watched quinoa grow in popularity. Between 2007 and 2013, the amount imported into the US increased tenfold from £ 7 million to almost £ 70 million. Much of it came from Bolivia and Peru, both of which recorded a seven-fold increase in quinoa exports between 2005 and 2013. The United Nations declared 2013 the "International Year of Quinoa" to recognize the work of local farmers in the Andes who grew the grain. José Graziano de Silva, then Director General of the Food and Agriculture Organization of the United Nations, declared quinoa an "ally in the fight against hunger and food insecurity" because of its nutritional benefits and its ability to thrive in sometimes harsh agricultural conditions. It was also celebrated as a promising harvest in a world exposed to climate change.

The increase in demand has led to drastic changes for native farmers in the Andes. A pound of grain that sold for just 25 cents in 2000 began to fetch prices as high as $ 4. Anthropologist Emma McDonell found that this income enabled many subsistence level farmers to “send their children to university, invest in new motorcycles and cars, build new houses, and buy agricultural technology for their own To increase harvests ”. However, as the boom continued, smallholder farmers faced increased competition from larger farms, including global agribusiness concerns. By 2014, the price of quinoa had dropped to 60 cents a pound.

Newspaper reports from this period also claimed that many farmers stopped eating the grain their families had grown for generations and instead opted for less nutritious pasta and rice to export their quinoa. But Gorad denies this. "Not all of the quinoa they produced were exportable," he says. The farmers he knew had enough for their own families and still brought in additional income. "These people were poor in dirt," he says. "When the price of quinoa rose, a lot of wealth came to Bolivia that it desperately needed."

Still, he admits that the quinoa boom had its victims. In some cases, the family members of the farmers who worked in the town came back to the farm to help, he says. When the price fell, those who had given up other jobs got into trouble. "In individual cases there are people who have been confused," he says. "But the original farmers were still better off in the end than without the increased sales."

Gorad himself has also not made oversized profits from quinoa. After leaving the Quinoa Corporation, he advised on various international projects, including efforts to bring quinoa to Tibet. As the prevalence increased and new varieties were grown, he distributed seeds and information to those interested in growing the grain in the US and abroad. "I think I did more to promote quinoa after leaving Quinoa Corporation," he says. “I was no longer forced to work for the good of the company. I worked for quinoa! “This job was largely a love affair – Gorad worked as a paralegal for a friend in Manhattan for seven years to pay his bills.

Today Gorad lives in a skyscraper in Midtown, New York in the shadow of the Chrysler Building. Retired, he spends his days on the rooftop meditating and doing tai chi – a practice established long before the covid-19 hit. (In fact, he sees the pandemic as an opportunity for personal growth that comes with accepting change. Although ordinary life has been disrupted, "the bottom line is that we are still here no matter what has been lost or changed," said he says.) He is quick to say that 20% of the apartments in his building are rent stabilized, including the one he shares with a friend. "Quinoa didn't make me rich," he says. "I wasn't and still am not a businessman." 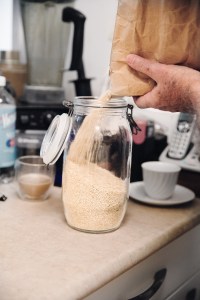 Gorad is well aware of how unusual his life course has been, considering where he started. "I'm a Jewish kid from the Bronx. I'm a nerd," he says. "Everything in my early life was programmed and planned. I just felt like my life would not collapse if I went off the beaten path It would open up to something else, more exciting. And that's exactly what happened. "

"I used the business to serve a mission," he adds. "This is what I learned from Buckminster Fuller, who lectured at MIT: You should do what you do because it is good for humanity."

In Gorad's apartment, the kitchen and the cupboard in the entrance hall are crammed with quinoa from all over the world: jars with pearls of mother-of-pearl from Bolivia, parcels of small white, red and black grains, samples of a dark and sticky Canadian variety, almost like sticky rice. "I used it to make cakes and bread," he says, offering a piece of a dark brown loaf that is thick and sweet. "I still feel like there is no other food that is as good for my body as quinoa."

Let the quinoa, potatoes, carrots and onions simmer in water until soft (approx. 20 minutes). Add corn and simmer for another 5 minutes. Add milk and bring back to the boil. Season to taste. Just before serving, add parsley and some butter.

Grind raw quinoa in a blender to make quinoa meal.
Mix wet ingredients together. Mix dry ingredients. Combine the two. Bake in a greased 9 "x 9" pan or muffin pan at 425 ° F for about 25 minutes, or until golden brown.