Watson: Buying and selling Fuller would have been hell

Wide receiver Will Fuller caught a touchdown for the sixth straight game on Sunday as he helped the Houston Texans to a win over the Jacksonville Jaguars after being linked with a trade to the Green Bay Packers prior to last Tuesday’s deadline.

There was nobody more relieved than Deshaun Watson when Will Fuller was still a Houston Texans player after Tuesday’s NFL trade deadline.

Having traded Watson’s favourite target DeAndre Hopkins to the Arizona Cardinals this past offseason, Houston appeared ready to strip their quarterback of another weapon as they listened to offers on Fuller.

The Green Bay Packers are believed to have made a run at him prior to the deadline as they sought support for Davante Adams, however the two sides were unable to agree on value.

Watson and Fuller linked up well in Sunday’s 27-25 win over the Jacksonville Jaguars, the former connecting with his lead receiver for a 77-yard touchdown. It was the sixth straight game in which Fuller had hauled in a touchdown catch, marking the longest streak by any player since Antonio Brown’s eight-game stretch in 2018.

“It would have been hell if they would have done that, for sure,” Watson said post-game when asked about the possibility of Fuller being traded. 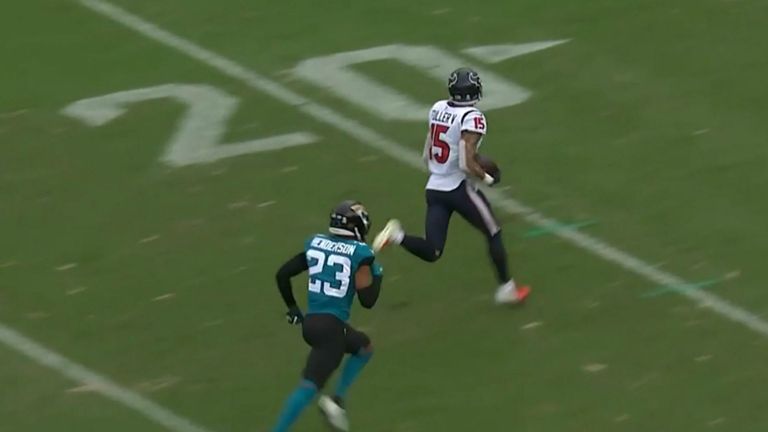 0:30 Deshaun Watson completes to Will Fuller for a 77 yard touchdown pass for the Houston Texans against the Jacksonville Jaguars.

Deshaun Watson completes to Will Fuller for a 77 yard touchdown pass for the Houston Texans against the Jacksonville Jaguars.

Fuller caught all five of his targets on Sunday for 100 yards and a score in a bounce back week following his three catches for 35 yards and a touchdown in the Week Eight defeat to the Green Bay Packers.

His value as a deep-threat has been undisputed since being selected in the first round of the 2016 Draft, with niggling injuries the major hindrance to his efforts to establish himself as a consistent threat. The hope is that he has turned a corner this year in regards to his health.

Speaking post-game Fuller admitted “it really sucked” to be shopped by the Texans prior to the deadline.

“Just giving this organisation my all, coming to work every day, very unselfish player, do everything they ask, and then, just to be shopped around, I did feel a certain type of way,” he said.

“But like I said, I’m happy to be here. I’m happy to play with Deshaun and continue to try to get wins with this organisation.”

Sky Sports NFL is your dedicated channel for NFL coverage through the season – featuring a host of NFL Network programming, a new weekly preview show as well as at least five games a week and NFL Redzone, you won’t miss a moment. Don’t forget to follow us on skysports.com/nfl, our Twitter account @SkySportsNFL & Sky Sports – on the go!