Liverpool signed Diogo Jota from Wolves but what made them buy him?

Wolves supporters resigned to the possibility of losing one of their star names this summer for a fee in excess of £40m might have expected Raul Jimenez or Adama Traore to be the man departing. The name of Diogo Jota would have been some way down the list.

Not that he was not loved at Molineux. The Portuguese forward has a highlights reel like few others at the club. A hero of Wolves’ promotion to the Premier League, it was Jota’s winner against Chelsea that helped turn the club’s first season back in the big time. His goal in the FA Cup victory over Manchester United raised the roof off Molineux’s South Bank.

It was his last-minute winner against Leicester that completed the first Premier League hat-trick ever scored by a Wolves player. He added two more in the Europa League last season, his partnership with Jimenez central to so many magical moments. Jota’s sheer sense of adventure, his direct running, his enthusiasm, will always be cherished in Wolverhampton.

It is the timing of the move to the Premier League champions that is curious. While this might be viewed from the outside as Liverpool poaching one of Wolves’ best players, the transfer comes just as Jota’s progress had stalled. Having lost his place in the team following a poor run of form, there were doubts about his importance to the project going forward.

Jota’s performances since the restart had not been good. He has long been a streaky player, capable of looking unplayable at times, hence those hat-tricks. But then there would be the long spells in which he did not threaten. Twice last season he scored five goals in two games. On five separate occasions he made five consecutive appearances without scoring.

The most recent dip came at an unfortunate time – left out of the line-up for the Europa League quarter-final against Sevilla. It was no great shock when he started the new season as an unused substitute in Wolves’ 2-0 win over Sheffield United on the opening weekend.

Jota was perhaps fifth choice for three forward places even before Wolves’ record signing of Fabio Silva. Now he finds himself catapulted into a new world – the most expensive attacking acquisition ever made by the reigning Premier League and world champions.

So what is it that Liverpool have seen in him? The track record of celebrated sporting director Michael Edwards rules out the possibility that this was a mere impulse buy. The analysis will have been done. Boxes ticked. There are reasons why Jota will have appealed.

Firstly, Jota is 23 years old and that puts him right in the sweet spot for a Liverpool signing. In a sense, the club broke their own rules to bring in Thiago Alcantara from Bayern Munich. Recruiting players in that younger age bracket has been crucial to their success.

Trent Alexander-Arnold, an academy graduate, and Jordan Henderson, Liverpool’s longest-serving player, bought by the previous regime aged just 20, were the exceptions in the line-up that won the Champions League final last year. The other nine starters were aged between 23 and 26 when signed. Able to make an instant impact. Able to improve.

It helps to explain why Liverpool were ready to allow Ki-Jana Hoever to move in the opposite direction. There is still a belief at Melwood that the 18-year-old Dutchman has vast potential – but that is all it is for now. Analysts take the view that a lot can happen in a player’s development between the ages of 18 and 23 and it can be very difficult to predict.

The underwhelming efforts of Jordon Ibe and Dominic Solanke since leaving for Bournemouth support this view. When bringing in a player at 23, someone like Jota who has already made more than 200 senior appearances in club football, and who scored his first goal for Portugal earlier this month, the level of performance is more guaranteed.

That does not mean that Jota has reached his ceiling. Here, an encouraging comparison with Sadio Mane could be enough to have Liverpool supporters excited – if they aren’t already after hearing assistant manager Pep Lijnders describe Jota as “a pressing monster” on Wednesday.

On the face of it, comparing the new signing to one of the outstanding performers in the Premier League seems absurd. But Liverpool will have looked at Mane’s status when he arrived at Anfield and spotted a similar trajectory in Jota’s record at Wolves.

Like Jota, Mane had impressed at a club outside the traditional top six as part of a strong Southampton side. He too faced questions about his streaky form as a younger man.

In his final season on the south coast, Mane went on a run of 16 games without a goal, culminating in a red card at Stoke. He was actually on the bench for five of Southampton’s final 13 Premier League games that season – even an unused substituted at Swansea.

But Mane showed enough form in the spring, scoring twice against his current club before bagging a hat-trick against Manchester City, to convince Liverpool that he had the talent to explode in the right environment. That belief has been emphatically vindicated.

Mane has gone on to prove himself as a world-class player, a key figure in Liverpool’s Champions League success and arguably the most important forward in their title win. Jamie Carragher is now talking about Mane potentially being included ahead of John Barnes in the club’s greatest ever team before his days at Anfield are over. Some praise.

At 28, he is at the peak of his powers. But at a club as savvy as Liverpool, it is only natural that the search is on for the next Mane. In Jota, they have identified a player with Premier League experience who is at the right age to embark on the next challenge of his career. 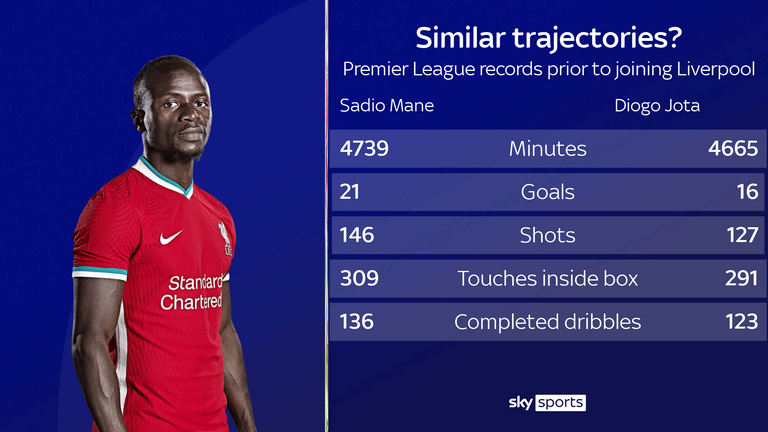 Is Jota on a similar trajectory to Liverpool favourite Sadio Mane?

The similarities are more than superficial. Dig deeper and the parallels are there in the numbers. The two men had played almost the same amount of Premier League minutes prior to joining the club with Jota tracking Mane’s statistics for goals, assists, shots, completed dribbles and touches in the opposition box. The profile is remarkably similar.

Jota cannot quite match Mane in any of those categories but he is ahead on one metric for his time prior to joining Liverpool – expected goals. Mane’s two years at Southampton should have yielded 19.47 goals, while Jota’s last two years reveal a figure of 20.31. Take out penalties and his expected goals per 90 minutes last season was higher than Jimenez.

Those number provide further evidence of similarity with Mane and are an indication of the areas that Jota finds himself, offering further hope that this is a player whose output is underrated. In the right circumstances, those shots might start to find the back of the net. 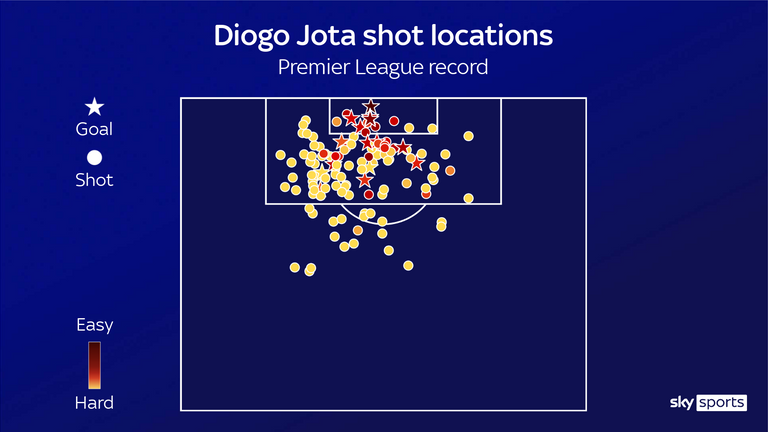 Jota’s shot locations during his Premier League career with Wolves

Jurgen Klopp will be confident that his influence can help make that happen. This is a player who was principally used in two position at Wolves – on the left of a front three in a 3-4-3 formation or as a strike partner for Jimenez in a 3-5-2. He was more potent in the latter role.

When used on the left, his dribbling lacked the subtlety required when he found himself isolated in one-on-one situations up against his marker. A dribble success of 43 per cent compared with Traore’s 69 per cent success rate over on the other flank these two past seasons reflects that. Jota has been more effective when able to pop up in central areas. 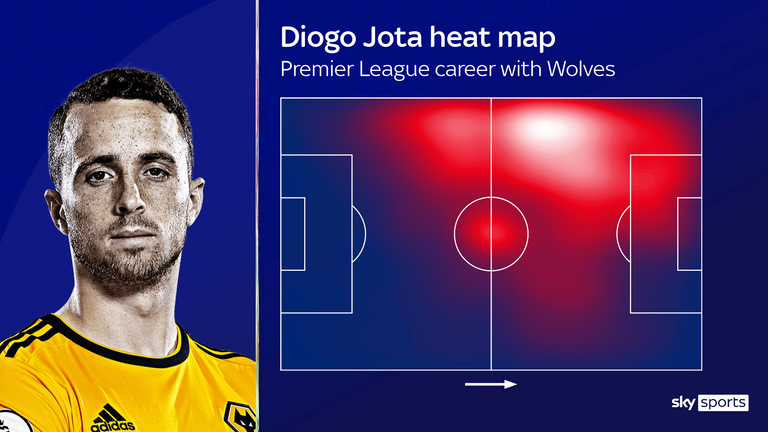 Jota’s heat map during his Premier League career at Wolves

While he can expect to find himself in what is nominally a front three rather than a front two at Liverpool, there is still more chance of him receiving the ball there in Klopp’s system.

Liverpool’s dominance of possession means that the wide forwards operate more like inside forwards – particularly given Roberto Firmino’s tendency to drop into pockets of space. It helped Mohamed Salah and Mane share the Premier League golden boot the season before last.

Jota could benefit too because this would allow him to play in that left channel that he so favours. It would be closer to the role that he had at Wolves in their promotion season when scoring 18 goals – the last time that he played in a side that dominated its division.

He is a finisher rather than a creator. It took Pedro Neto and Daniel Podence, his rivals at Wolves for those wide-forward positions, just six minutes at Bramall Lane to match Jota’s tally of one Premier League assist for the whole of last season. Do not expect him carving out openings. What Klopp will be hoping is that he can be the man to finish them.

One of Jota’s best assets is his ability to finish with either foot. Indeed, despite being right-footed, he is arguably a more powerful and impressive striker of the ball with his left.

In fact, of the 56 Premier League players to have reached double figures for goals in the competition over the past two seasons, Jota is the only one to have scored exactly the same number of goals with his left foot as with his right foot – a truly both-footed player. 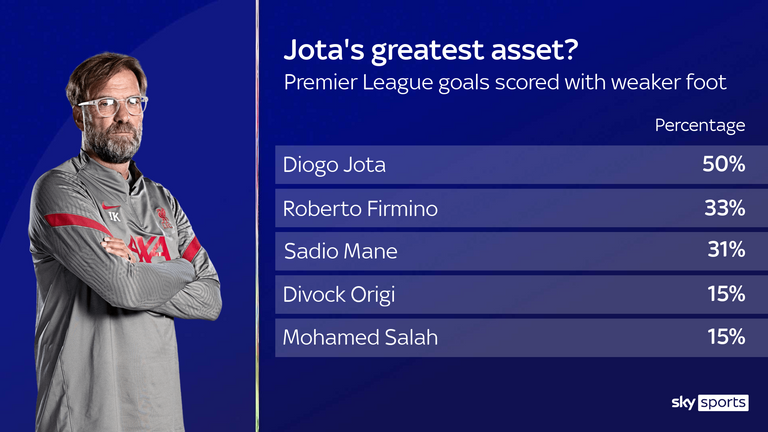 This ability with both feet means that Jota has the potential to cover for Mane on the left – the role he knows best – but could also be used on the right if the situation demands it.

Having also been deployed as the more withdrawn forward in a front two, perhaps he could even replace Firmino, switching with Salah in a fluid attack. Expect the bulk of Jota’s Premier League appearances to come from the bench as long as everyone is fit at Liverpool, but this ability to cover all three of the forward positions means he could still see plenty of action.

He will surely be content with that role for now, ready to make his mark at one of the world’s biggest clubs having just broken into the Portugal national team. At 23, this is the next step in his career and he is making it at a club where he can expect high-quality service in the areas that he thrives and a tempo of football that suits his style of play.

He comes with the pressure of a significant fee but little responsibility to be the man who carries Liverpool’s hopes this season. A useful input across four competitions would represent welcome progress for his new club and the player himself. His Wolves adventure looked to have run its course. Diogo Jota’s journey with Liverpool has just begun.

ONE MILLION POUNDS! Can you imagine?

You read correctly. Do not miss your chance to scoop £1m for free in this week’s Super 6 round. Play for free, entries by 3pm Saturday.